On December 6, 1836, Andrew Donnelley with his sister and brother-in-law, Katherine and Francis Short, and a few others, arrived in Hartland by horse and wagon from Lowell, Massachusetts. They camped in what is now the southwest corner of Greenwood Township, the Shorts staking their claim there. After spending the winter in Chicago, the party returned in the spring of 1837, and Mr. Donnelley took up his claim in what is now the southeast corner of Hartland Township. He later built an inn, and the place became known as Donnelley’s Settlement. While in Chicago, they met Father John St. Cyr who promised to visit them in their new home. Father St. Cyr was the first pastor in Chicago, having been sent there in 1837 by Bishop Rosati of St. Louis.

In the summer of 1837, Francis Short traveled by horseback into Chicago and guided Father St. Cyr and an Indian out to Donnelley’s Settlement where Mass was said for the first time in McHenry County. The Indian came along to guide the priest back, for there were no roads, and they had to follow trails. From that time on, Mass was said at intervals at the various homes of the early settlers. Until there was a resident pastor, and later in the 1870’s when for some years the parish was administered from Harvard by Father Dominic F. Egan, the priest would stay with various families so that all their neighbors might have a chance to attend Mass and receive the sacraments.

A variety of priests came out for Mass to the little settlement from time to time. According to diary of Bishop William Quarter, Donnelley’s Settlement was one of the most important missions of the Diocese. In 1844, Bishop Quarter ordained Father Patrick A. McMahon (1844-1850) and appointee him that summer as pastor at Donnelley’s Settlement or Hartland as it is now known. Unfortunately, his health was poor, and Bishop Quarter soon was forced to send Father John-Faughnan, also newly ordained, to assist him.

It served the growing congregation for over half a century until it burned to the ground in 1913. It was during the pastorate of Father Thomas Kearney (1909-1929) that this historic church burned.

The location selected for the new church was across the road, on high ground so that it might be seen from a long distance. It was solemnly dedicated by Bishop Peter J. Muldoon on August 15, 1914.

Much needed improvements to the church and rectory were made during the pastorate of Father Edward A. O’Brien (1930-1933).

In 1941, the church was once again completely destroyed by fire.

Despite the fact that the parish had decreased to a mere 15 families (many had lost their farms in the great depression and moved to the city), they all rallied and came forth with generous donations even with the very poor economic conditions for the typical farmer. A new church was built on the original foundation at a cost of over $35,000. Leaving only a small debt of $8,000 which was soon paid off, the new church was blessed by Bishop Edward F. Hoban in July of 1942, shortly after the appointment of Father John M. Dording (1942-1960) as pastor. In 1953, Father Dording had the church completely redecorated.

In order to celebrate the parish’s Sesquicentennial, the church was redecorated and re-carpeted in 1986, during the pastorate of Father Lawrence M. Urbaniak (1984-1999).

On December 22, 2002, St. Patrick Parish celebrated four years of renovations to the parish church. Father Joseph P. Naill, assisting at St. Patrick 2001-2004, concelebrated Mass with Bishop Thomas G. Doran who dedicated the church’s new altar. Since then we have remodeled the basement and improved access to make the building handicap accessible. 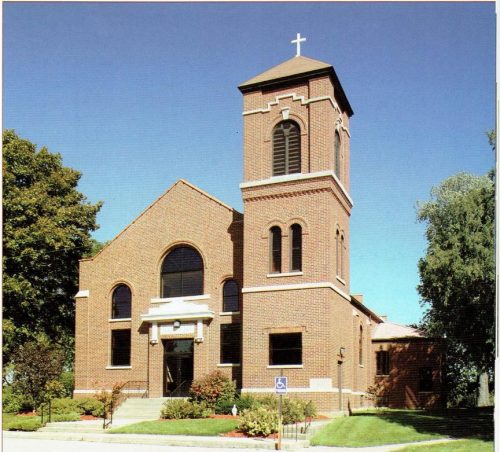